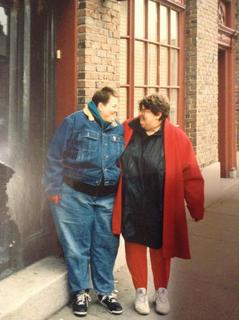 I just learned, through a beautiful, heartbreaking post by her wife Judith Stein, that Meridith Lawrence has died.

I met Meridith in the early eighties when she was co-running a Fat Lesbian Group at the Cambridge Women's Center. She had an infectious laugh and lots of knowledge of communities I wanted to be part of. Meridith really was the person who opened to doors for me to explore what it might mean to be a fat dyke who was determined to live a full, complex, self-loving life with plenty of company from others who were doing the same.

At first Meridith's lover Judith was mostly a legend — a fat leader and writer who wasn't going to groups any more — but it wasn't too long before I met Judith, too, at a raucous group meal after she gave a reading at New Words, the women's bookstore in Inman Square. Judith and Meridith were so glamorous and sophisticated to me. The love between them was palpable, always. Meridith and I organized a one-time fat swim together at the public pool in JP, across the street from my apartment.

I used to run into Meridith on the bus sometimes, too — she talked to me about how to negotiate space in those not-big-enough-seats — I believe she said her response to being shunned by strangers on buses was, "Ummhmm, yes, more room for me."

Meridith and Judith threw fantastic parties full of people I wanted to talk to, in their home filled with fat art. They were generous with me in more ways than I can say. They hosted me and other writers from Western Mass when we came east to the big city to go the OutWrite Conference, that wonderful gathering of queer writers that happened year after year in the nineties. They went, too, of course. They paid the fee for me to go to a fat conference.

Meridith had bold opinions and an organizer's soul. She had warmth. She was brave, and she talked about things that had been taboo. Once I interviewed Judith and Meridith about the history of fat activism at the Michigan Womyn's Music. I was on radio shows with them in the eighties, too. (Charlotte Cooper digitized those — I'll try to link to them in the comments.) Oh, and the anniversary boat rides and West Side Story parties! Such community-builders, Meridith and Judith.

I haven't seen Judith and Meridith in recent years, but I know that there are those who have been experiencing all of that love, friendship and warmth on the West Coast. I am mourning for Judith, for all who loved Meridith, and for the loss of such a powerful presence in the world. Here's picture of Meridith and me on the way to the OutWrite Conference in Copley Square in Boston in June 1995. Sally Bellerose was there, too, but I am pretty sure that Judith took the picture.

Donations in Meridith Lawrence's memory may be made to the following:
Women's International league for peace and freedom.
Black lives matter.
Power to live
Sogorea Te' Land Trust

Have you posted your interview with Meredith & Judith about fat activism at Michfest anywhere? I would love to hear more about what "fat outreach" looked like for them! <3

I haven't, Noah. Maybe someday, with Judith's permission. I did recently write a remembrance you might be interested in. It's about Joan Drury, former publisher of Spinsters Ink, who had a lot of Minnesota/mid-continent pride. She published my first two novels. You can find it on Lambda Literary from last week.

Venus of Chalk is by turns tender and ruthless, dark and funny, haunting and starkly contemporary. In spare, eloquent prose Stinson mines depths most writers shy away from. This is one ride you won't want to miss. -- Alison Smith, author, Name All the Animals. Now available at Book Moon Books!