Judith Katz wrote a wonderful review of Martha Moody in Lamda Literary Review. "Susan Stinson's substantial and delicious historical novel, Martha Moody, has been reissued by Small Beer Press, and it is certainly cause for celebration." It's also a great history of lesbian and feminist publishing.

Listen: Our Work and Why We Do It: Art Middleton Interviews Susan Stinson 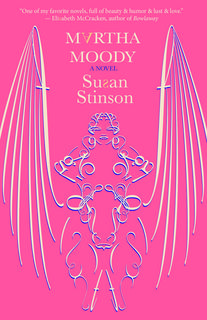 "Martha Moody, is a rich and complicated novel, nearly edible in its sensuous physicality." Sojourner

"...Stinson's follow-up to the utterly fantastic Fat Girl Dances with Rocks is so bloody good it made me want to run naked through a meadow..." - Time Out, London

"Stinson's celebration of the love and friendship of women deserves a larger audience than one made up of only lesbian feminists." Booklist

"One of Stinson's triumphs is to make Amanda's fairy-tale success as a writer seem completely plausible amid the vivid depiction of the grime and hard work of her life as first a farmer's wife, then a single woman struggling to survive on the small homestead." Margot Livesey, Scotland On Sunday

"...remarkable story...Amanda's fictional Martha is a wild and magical creature who churns clouds into butter with her magnificent thights and flies on the back of a fabulous winged cow." Bay Area Reporter

"Susan Stinson writes as though she means every word to be tasted, savoured." Women's Library Newsletter

"...a jewel...Martha Moody is magnificent. She is unashamedly fat and she is beautiful, dignified and desirable. She will take her place in modern literature as a truly marvellous role model for large women. Never before have I encountered the large body depicted with such beauty." Shelley Bovey, Yes Magazine, UK

German edition in print and e-book were reissued in 2016 by Fischer Verlag.

Venus of Chalk is by turns tender and ruthless, dark and funny, haunting and starkly contemporary. In spare, eloquent prose Stinson mines depths most writers shy away from. This is one ride you won't want to miss. -- Alison Smith, author, Name All the Animals. Now available at Book Moon Books!

The Letter Q
Letter to my young, queer self. As seen on The View.
Loading…}